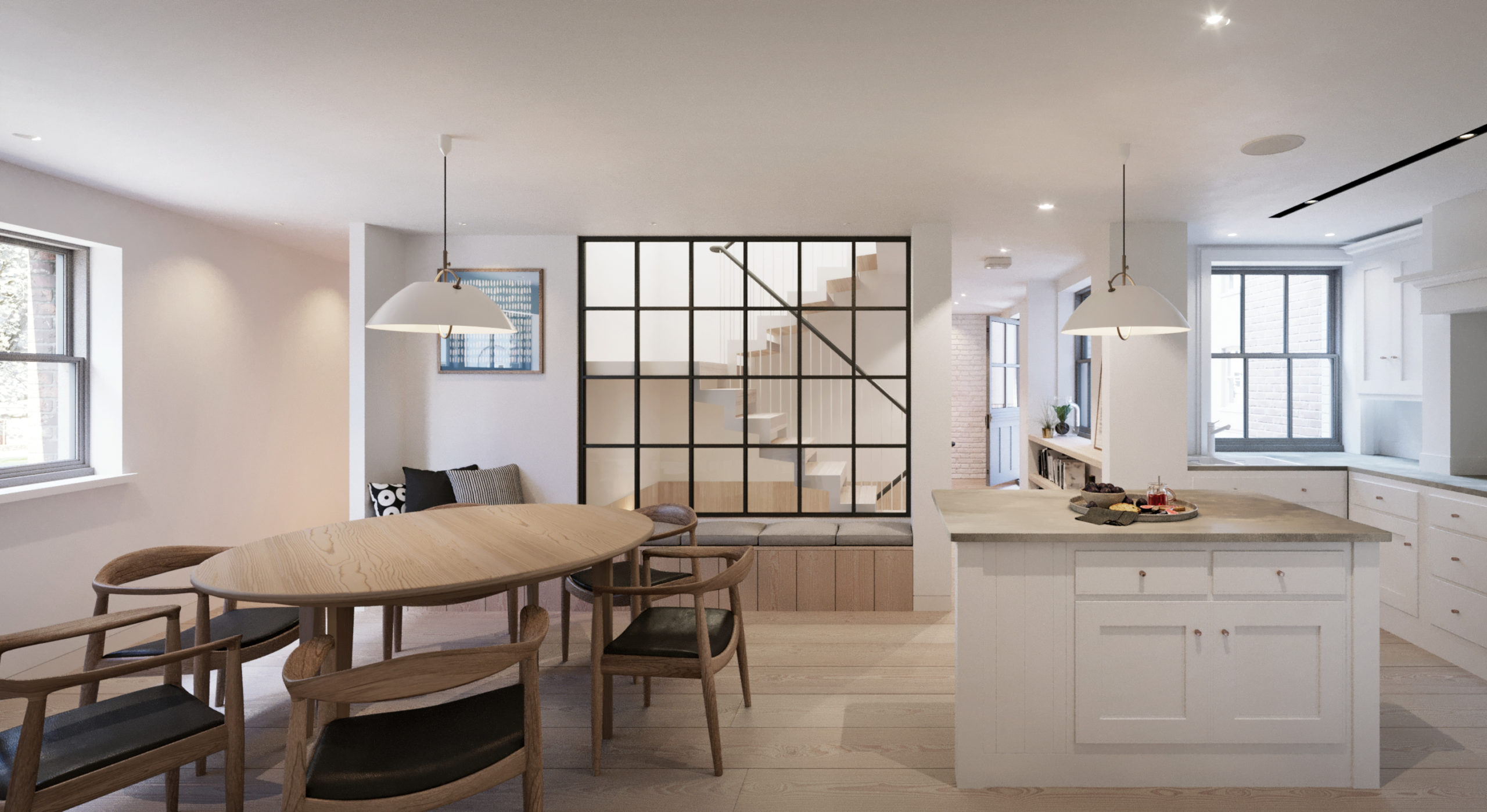 A modest mews house in Lancaster Gate, London is about to undergo a radical transformation into a family home, thanks to a highly tuned design produced by Hackney Architecture Firm, Neil Dusheiko Architects.

The L-shaped terrace is located in the Bayswater Conservation Area and occupies a snug corner of a cul-de-sac, historically the coach house quarters to Georgian properties behind. Laid out over three floors, with a prominent dormer loft conversion and ground floor commercial space, over time this had begun to encroach on first floor residential living. The client wanted to turn the property back into a full family home, with a garage and open roof terrace.

The tight site required close consideration to the neighbours, and the conservation area meant limitations to any outside changes, leaving the North London residential architects with a design challenge on their hands.

‘The roof terrace was a sticking point and restricted light at the back meant we wanted to change the windows,’ says project architect, Pamela Guo. ‘At the front, the bulky front dormer didn’t fit in with the rest of the street or make the best use of space inside. We did a lot of research during the pre-planning process to understand what the council would and wouldn’t allow in our design.’

The mews terrace shares party walls with a hotel on one side and a residential property on the other. At the rear, the garden sloped upwards to back onto a church where the surrounding outdoor space is elevated. As a result, light was restricted to the house at ground floor level, and to protect privacy, the first floor windows were set high up, with just one small window in the dormer above.

Planning approval was granted, allowing wide windows to be added at ground level, as well as the lowering of cills on the first floor.

‘Our argument was the church wasn’t inhabited as a dwelling and people weren’t there all the time,’ says Pamela. ‘We went on to rationalise the first floor windows, proposing two bigger ones covering the same area, with lowered cills, and were allowed to project this arrangement up to the loft. The two larger windows better address the two primary spaces on both floors.’

The architectural design team working on the London project, proposed a central stair core designed to anchor the layout: on the ground floor, car parking sits one side with a spare bedroom, kitchenette and shower on the other; the first floor divides into a kitchen-dining area and separate living room; and on the second floor, the master bedroom ensuite is split from a smaller bedroom and shower room.

The open roof terrace seemed unlikely to be approved as previously neighbouring applications had been refused. A ‘dummy’ mansard roof at the rear became the agreed solution, hiding the roof terrace so it won’t be visible from the street and creating a bigger floor area within the loft.

‘We were going to take a two-stage approach and go back with a revised design for an open terrace, but the client decided they were happy with the result,’ says Pamela.

At the front, the London architecture firm proposed to change the incongruous roof dormer, and achieved approval for a design that picks up the line and profile of the extensions in the rest of the street.

Planning approval was granted for all the changes in just six weeks, which will soon result in a light-filled, 175sqm family home that blends in with its historical surroundings.