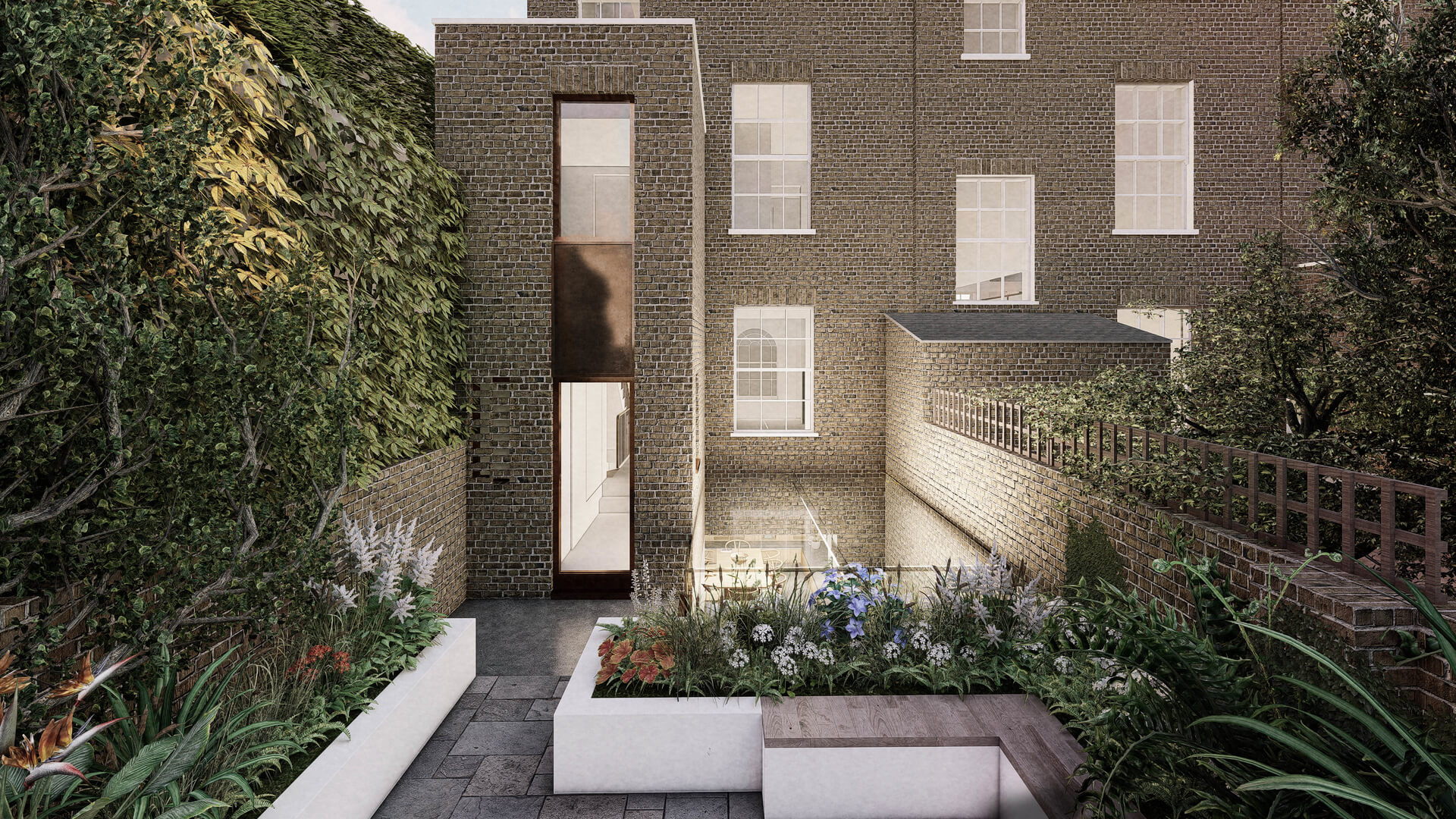 Architectural company in North London, Neil Dusheiko Architects have been working closely with a client on a design to renovate their Grade II listed Georgian house in Islington. The council closely monitor design proposals that alter the outside appearance of a listed building, and change original fittings and the layout inside.

The three-storey house with a basement was built in the 1830s and occupies a corner plot at the end of a terrace. The property differs from others in the row because it was converted into a shop and then back to residential use in the 1950s – this means the front door is located on the side of the house. The inside is in reasonable condition; however, it is a narrow building with a series of disconnected living spaces at basement level. The client wanted to improve this layout and investigate the possibility of a loft conversion.

The challenge is to produce a design that will satisfy the client’s needs as well as planning constraints to preserve the original Georgian building. In this case, the Grade II listed status applies to the house as part of a group of eight properties in a terraced row.

‘Particular attention is given to the façade at street level and features such as the material treatments, windows and railings,’ explains project architect, Pamela Guo. ‘This particular terrace is interesting because of its uniformity and unbroken cornice line running across the top of the houses.’

Islington architects, Neil Dusheiko Architects proposed two options for the new loft. The first takes its design cues from existing loft conversions, visible from street level, in the house opposite and in the next terrace. The second is a ‘secret loft’ built within the low valley of the butterfly roof and keeps the existing roofline intact.

‘Our justification for the first option is that the house is the “bookend” building in the row and already looks different from its neighbours with a front door to the side,’ says Pamela. ‘For the second version, we suggested the head height for the secret loft is gained by lowering the ceiling heights of the rooms below.’

At basement level, the kitchen and dining room have lower ceiling heights than the other floors, as does the outrigger accommodating the utility and downstairs toilet. The living room is located above on the ground floor and both levels have access to the tiered garden. Residential architects Islington resolved the disjointed layout and head height with a series of tiered spaces.

The kitchen remains at the front of the house with a change in floor level stepping down to the dining room. The new living room steps down again, and is partially enclosed by a glass conservatory that replaces the lowest tier of garden. To maximise the width of the rooms, the stairs are stacked on top of one another, and the lowest flight is designed to terminate as a single leg at basement level.

As a listed building, the council will want the original layout of the house to remain visible in some way so the house doesn’t lose all its historical character. ‘This is why the ceiling heights remain the same in the basement and we’ve suggested lowering the floor instead,’ explains Pamela. ‘The glass conservatory is set low too so as not to be visually intrusive from outside.’

The North London Architects plan to present their design in a pre-planning meeting to gauge feedback before progressing to the next design stage.

Neil Dusheiko Architects are architects in Hackney based in the London borough of Islington and are an architecture firm with projects in West London, Stoke Newington, Great Shelford and Cambridge